By Mitjavila Groupe23 October 2020News of the group 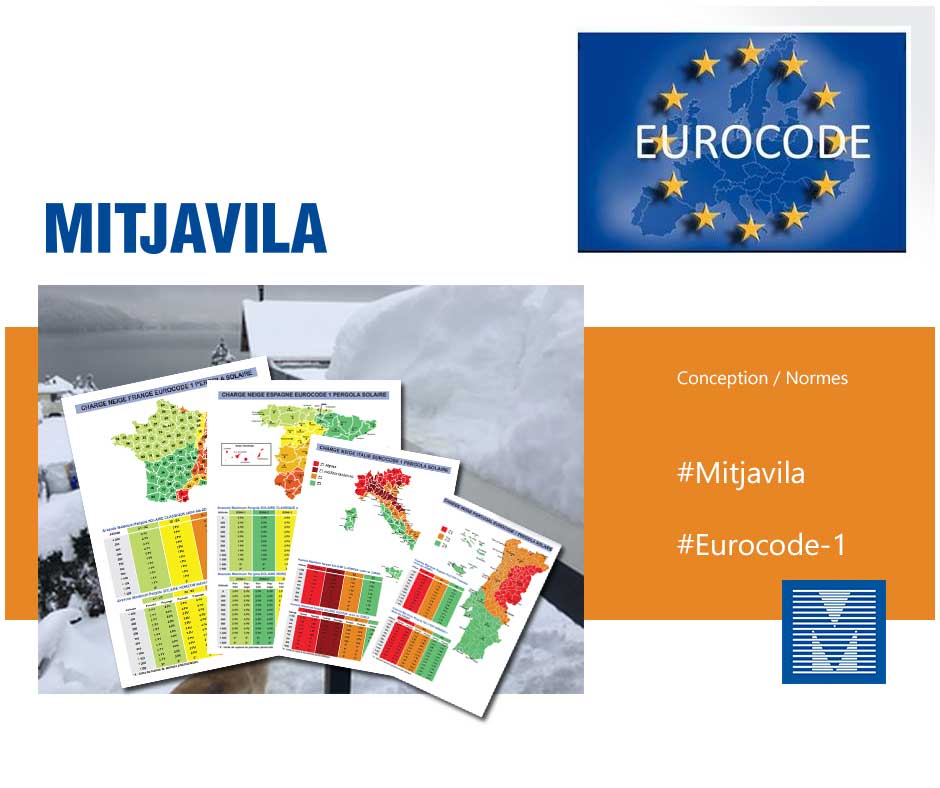 An aluminum structure such as a pergola is not subjected to the same forces depending on whether it is located in the north of France or in the south of Portugal. It must resist the foreseeable actions that it will be confronted with during its lifetime and is therefore subject to the Eurocodes. As a manufacturer, MITJAVILA today publishes indicative tables for snow loads for its fixed roof pergolas, Eurocode1.

What is a Eurocode?

The Eurocodes aim to harmonize construction techniques in Europe, and to facilitate free access for companies (public works, technical design offices, etc.) to the markets of other Member States. The drafting of the Eurocodes is entrusted to the European Committee for Standardization (CEN) to give these documents the status of full European standard. In France, following the “Europe plan”, it is AFNOR which publishes the official Eurocode Guides, taking into account the “National Annexes”.

In each territory and country, there is a cartography of the snow load on the ground. It is defined in Eurocode 1 (NF EN 1991-1-3 Eurocode 1 – Actions on structures – Part 1-3: general actions – Snow loads (P06-113-1: 2004-04, NA: 2007-05, A1: 2015-10, NA / A1: 2011-07, NA / A2: 2012-09). What data is the snow load of Eurocode 1 based on? The data – snow depth and / or snow loads – were provided by the national authorities in each country, then processed by statistical methods, thus determining different snow areas depending on the region. The weather conditions are different depending on the latitude and altitude of the pergola installation. In addition, in some areas, exceptional precipitation may occur.

A careful calculation for each territory and pergola

The standard indicates how to determine the values ​​of snow loads for the design of constructions. Based on the recommended calculation method and mapping, our design office has published indicative tables for MITJAVILA fixed aluminum pergolas. It is understood that a bioclimatic pergola must remain with the louvers in the open position in the event of forecast snow and a canvas pergola, also rolled up during inclement weather. These two models, like the Polytop retractable pergola, are therefore not subject to this Eurocode1 snow load standard. 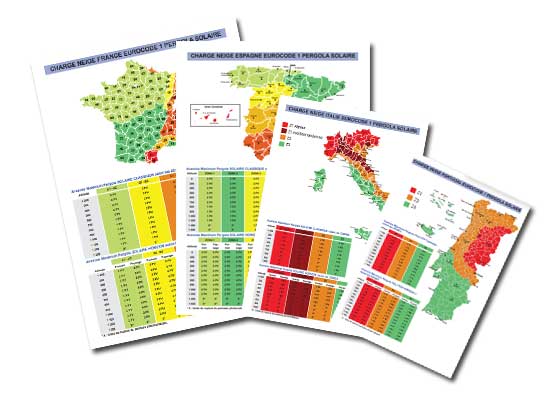 Attentive to provide you with the necessary technical information on our fixed roof pergola structures, Eurocode-1 summary tables have been produced for France, Spain, Italy and Portugal according to Eurocode 1. Depending on whether you reside in a “green” or “red” zone and even within an area, depending on the altitude of your land, your pergola may not exceed a certain projection. As an installer or future owner of a fixed roof pergola, you should take note of these tables to define the projection of your pergola.

Find these tables for download on each of the concerned products.

This post is also available in: Français (French) Español (Spanish)

We use cookies to ensure that we give you the best experience on our website. If you continue to use this site we will assume that you are happy with it.Ok